A sunny spring day on a Greek island. Flowers blossoming all around, their sense blending with the light sea breeze reaching the whitewashed villages up in the mountains. A warm feeling surrounding us as we walk through the narrow alleys, touching the bare stone of centuries-old houses and stables. A donkey is heard from the other side of the valley, its cry echoing far away. It’s beautiful, it’s peaceful.

A bunch of bulky old keys clings in the hands before opening the wooden door. A creaky sound and there it is: the old olive press is there standing, a solid reminder of human labour and times past.

From the outside, you could easily mistake this humble old stone building for a simple home or even a stable. This isn’t any industrial structure, unlike its modern descendants. Four thick stone walls around and the traditional supporting arch in the middle, separating the space in two and supporting the roof at the same time.

Traditional olive presses in Greece stopped functioning some decades ago, being replaced by modern, mechanized presses at different times depending on the location or the island. The new technology was immediately embraced with relief, leaving the old buildings almost totally abandoned, at the best being used simply as storage spaces. People were happy to move ahead and forget the long winter days of intense, hard manual work, the rainy nights carrying sacks of olives up and down the village.

Looking at the traditional olive press today and listening to the stories of men working in it, it isn’t hard to understand why the shift was so quick and left no time to look back. It is hardly imaginable for younger generations of Greeks today, who use olive oil with so much ease and in such quantities, to understand the labour their forefathers needed to produce this precious liquid. Only when you step in these old structures, with their bare ground and slight lighting, the bulky stone mills and metal press, only then it all starts making sense.

Olives and olive oil have long been some of the main products of Greece and a basic element in Greek diet, no matter how poor people may have been or what other means of survival they had. The annual olive picking season would typically take place in autumn, with the whole family taking part in the activity, carefully hand picking olives from the trees. Later, assisting tools were introduced, like the special fork that combs branches, dropping olives to the cloth spread underneath. The olive picking procedure has largely remained the same until today, especially in smaller, more remote places such as the islands, and autumn is still greatly marked by the olive picking season. 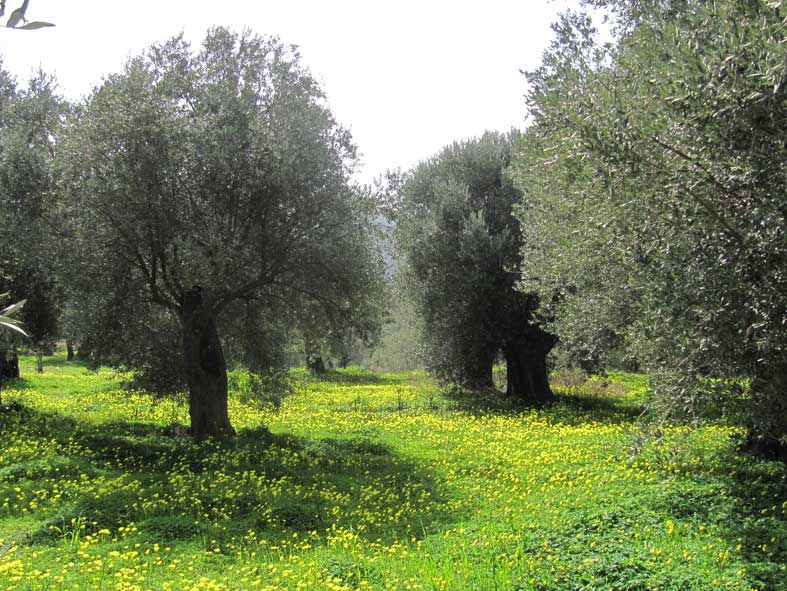 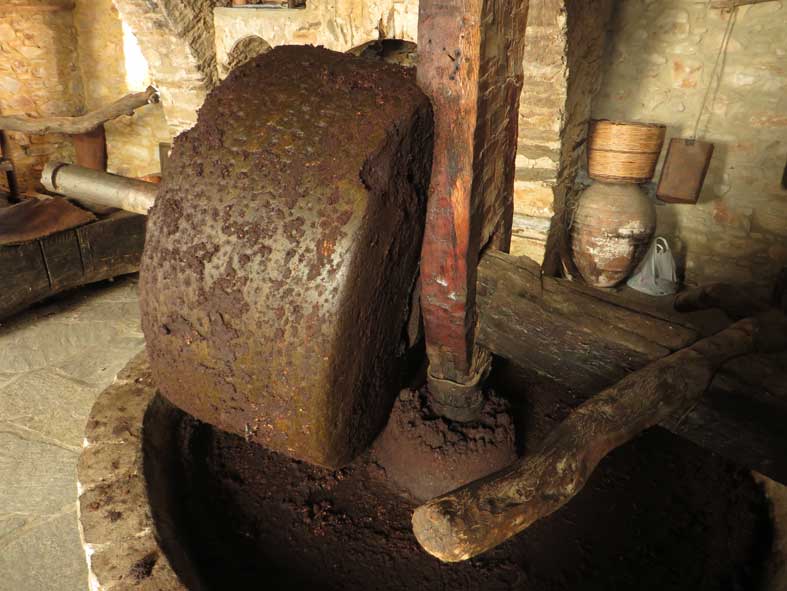 How the traditional olive press worked

Given the importance of olive oil, it is no wonder that even the smallest village used to have an olive press, with most villages on the Greek islands having 3 of them or more. These were what we would call today “private enterprises”, with the owner providing the facility to other villagers in exchange for a fee –traditionally 1/10 of the olive oil produced.

Once olives were collected and put in sacks in the field, they were carried on the back of humans, donkeys or mules to the olive press. Depending on the size of the facility, three to six people would be working there almost round the clock, each one in charge of different duties. It was hard work –but rewarded with such a precious resource that it was considered good fortune to be hired in the press. There are anecdotal stories of men using family ties or other connections to find their way to a working spot in the press. Times were truly different.

Several duties were necessary to be constantly well operating in order to ensure production. Early at dawn, the fire should be lit at the corner, which meant bringing wood, lighting it and keeping it burning. The fire would be burning as long as the press would be functioning, heating up water to be used at the press. Olives would be spread on the mill table. Men or donkeys would then push the large wooden handles that would put the mill stones in motion, pressing the olives and turning them into paste. A worker would be following the movement of the mill cylinders, holding a wooden pan to bring back the olives and paste towards the table, counteracting the centrifugal motion. Round and round the mill would turn, with 3 or 4 men or an animal painstakingly pushing the handles.

Once olives were transformed into paste, they were set into bags made of cloth. More than bags, these elements looked more like huge envelopes. The paste was distributed horizontally on the cloth surface, which was then closed by carefully picking all four corners. The thinner the paste layer, the better, and it was a privilege for a press to be known for the worker’s ability to give the paste layer the ideal thickness.

Cloth bags were then stacked one upon the other at the press. These were bulky structures, typical designs of the 19th century industrial era. Usually made of steel, their vertical axe would be released, allowing the bags to be placed between the pressing surfaces. Once the gap was filled, men would push the wooden handle that turned the vertical axis downwards, pressing the stack of bags. Again and again, this repeated movement created a rhythmical sound effect, the heavy breaths of men mixing with the metallic sound of the pressing axis being fixed and released. Steadily, the paste of the bags would come out as a golden-green liquid, falling in the pool in front of the press. The degree of pressure needed was such that once the handle could seemingly move no further, it was tied to a turning pole where 2, 3 or 4 men would combine their force to squeeze the bags even further.

Olive oil was mixed with warm water in the pool in front of the press, from where it was collected and put into storage pots. As oil would be concentrated on the surface, water would remain at the bottom, from where it would be pumped away through a waste channel.

Once produced and collected, olive oil would then be distributed to the people involved: the producer, the owner of the press and the workers. As simple as it may sound, division was an elaborate process and in some places, specific calculations had been developed. 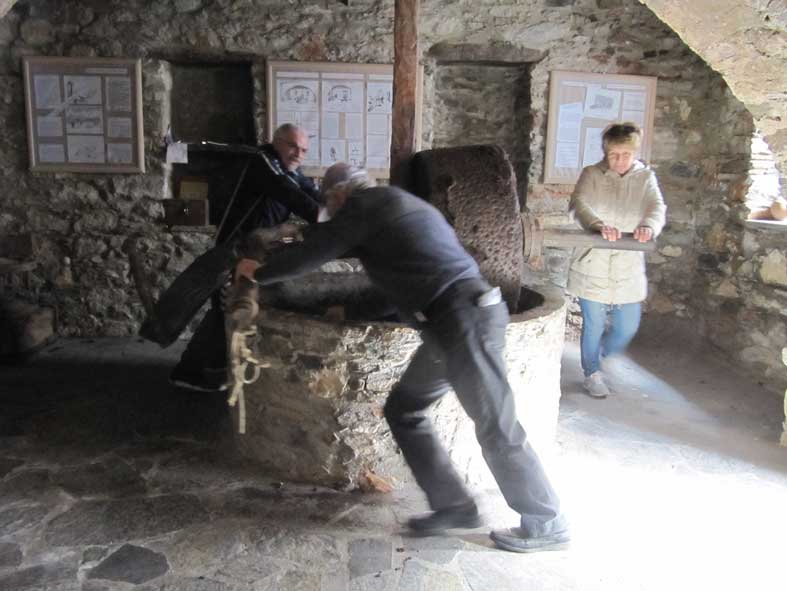 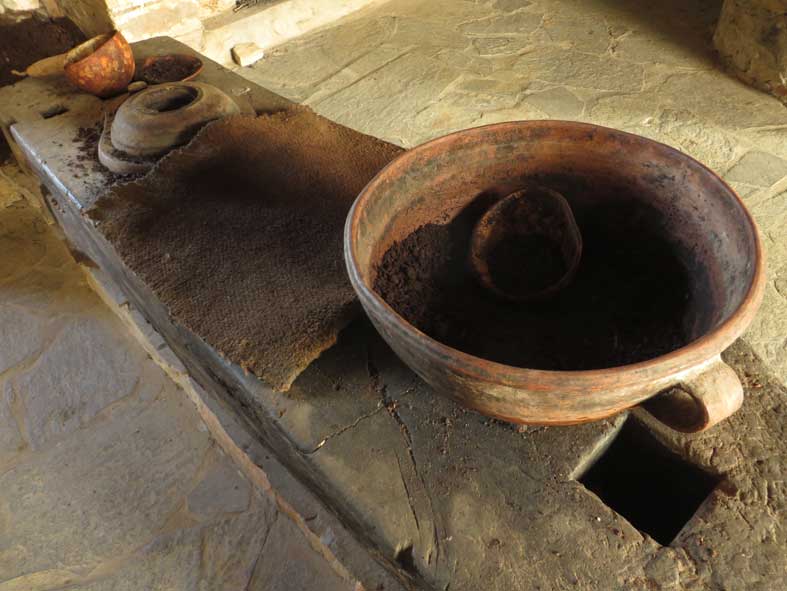 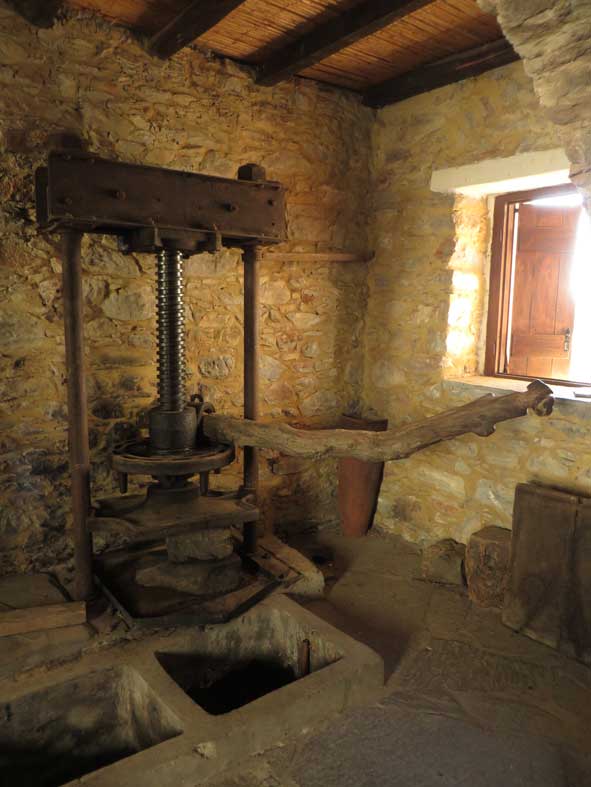 Through narration perhaps the labour of pressing olives still doesn’t sound far from what we would expect or even compare with today’s standards. But the sensation of being inside a traditional olive press today, surrounded by its simple yet impressive equipment, thinking of the endless hours of work that took place here in the past, the cold, the rain, the physical activity involved, the small production… It is a humbling experience and one that can only fill us with love and a warm wave of deep appreciation for all the generations of simple people that performed the same painstaking ritual every autumn.

But for all the comfort and ease we have gained in having our olive oil at hand on our table today, one thing has been lost forever: the joy of being together, of working with each other for a common good, the collective effort that every autumn would remind people of their common interest. And along with it, the stories and laughters shared in the evenings while sitting around the burning fire, a farewell to summer and welcome to winter. 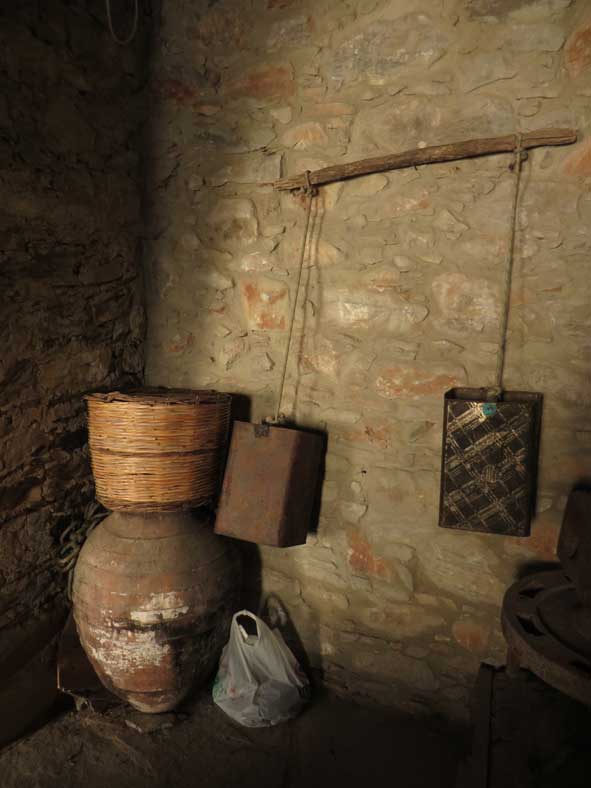