The Monastery of Panagia Chozoviotissa on Amorgos Island

The Monastery of Panagia Chozoviotissa is no ordinary structure. While it is true that all monasteries and other religious buildings are usually built amid a beautiful natural setting, as if praising God for this very beauty, Panagia Chozoviotissa still makes for a category itself. Any visitor who has stepped the more than 300 steps to its entrance can attest the unparalleled feeling of awe at the sight of this momentous structure, built in the vertical cliffs like an eagle’s nest, with only the azure sea lying 300 meters below.

The Monastery remains solid in this place for 1000 years now, housing the icon of Panagia (Virgin Mary) Chozoviotissa. The somehow awkward name derives from the name “Chozova”, an area in Palestine near Jericho, where the similarly built Monastery of St George is located. The icon of Panagia Chozoviotissa, a treasured work of art consisting of silver and gems, was originally created and kept there. 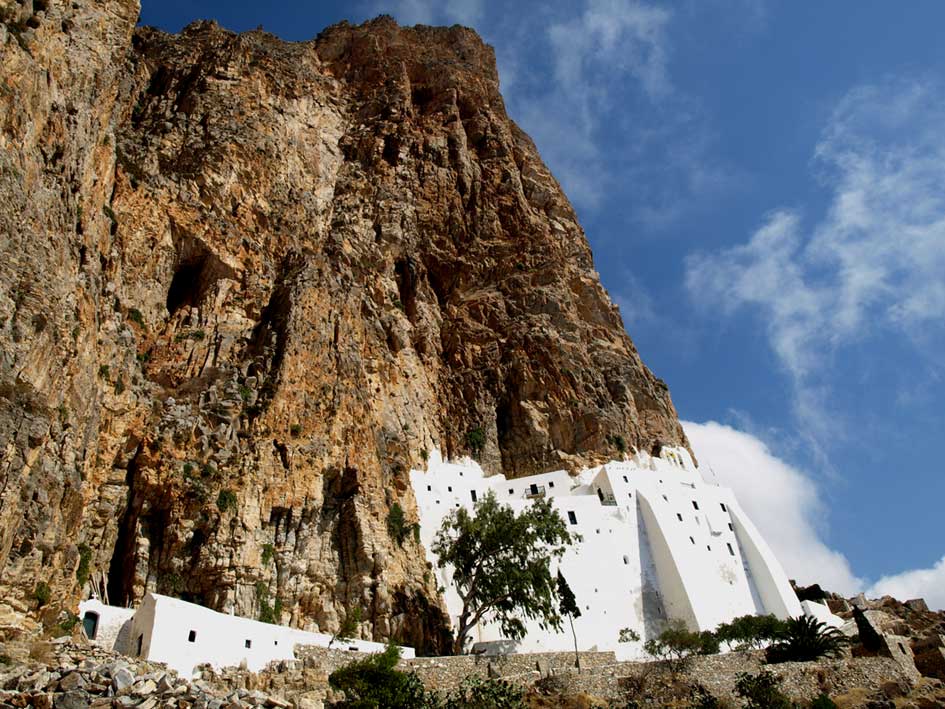 According to legend, it was the 8th century and the instability surrounding that time that drew the fate of the icon and ultimately of the island of Amorgos. It was the time of the advancing Arab conquest and of the movement of iconomachy, which saw icons being burnt or otherwise destroyed as symbols of idolatry. The icon was then considered to be in great peril. It was therefore put in a boat departing from Jaffa and was set adrift the Mediterranean. After its mysterious voyage, it arrived at the wild southern shores of Amorgos.

The area there was uninhabited at the time –whoever has seen the abrupt cliffs of southern Amorgos could not wonder why. Locals from nearby areas would even call it “demonotopos” (demons’ place). The rough, rocky terrain, prohibiting any cultivation or even cattle, was only dominated by the sound of wild winds. Yet, the floating icon arrived at these very shores and locals considered it a sign that this inhospitable land should house it.

Works started for a chapel to keep the icon at a place somewhere in the middle between the shore and the current location of the Monastery. However, as the story goes, every morning builders would find the work of the previous day destroyed. Unable to explain the phenomenon, they laboriously continued building, until one day, the mason’s chisel was mysteriously found much higher in the cliffs. Considering the finding as a divine indication of the spot to build, the chapel was constructed in that very corner of the unbelievably steep cliffs. It is the exact location of the Monastery church today, where the chisel can be still seen.

The original structure only consisted of the church that housed the precious icon. Over time, the spirituality of the location drew hermits who settled in the caves and niches in the surrounding area, gradually forming a community. A monastery was being born. And in 1088, the Byzantine Emperor Alexios Comnenos issued a decree officially renovating the building and giving it the form we can see today. 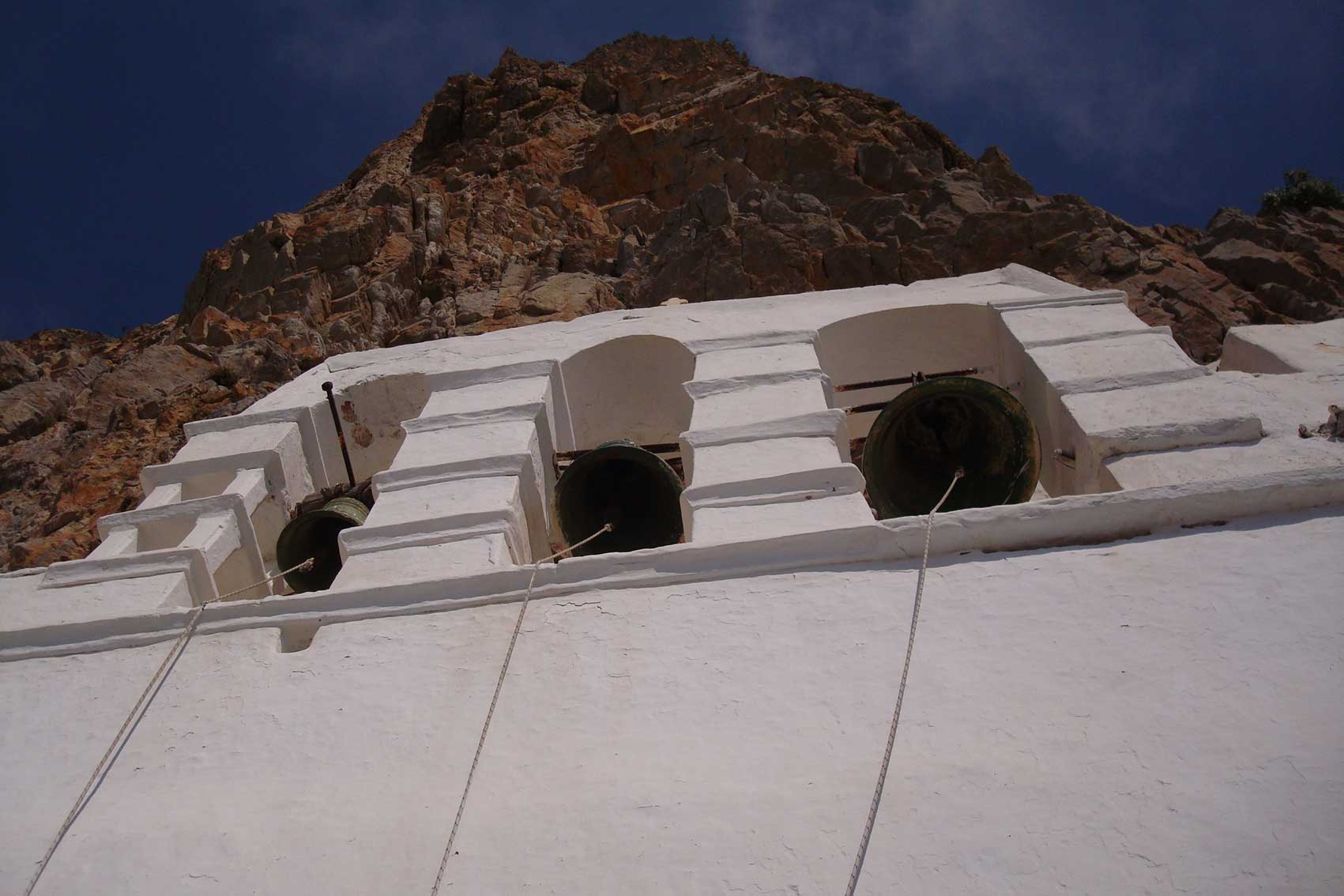 An almost continuous, blinding white wall, supported by massive buttresses, forms the impressive façade, practically the only visual element of the structure. Few small windows, scattered here and there, dot the surface. A narrow eastern side creates space for the entrance, a tiny wooden door that forces visitors and pilgrims to bow upon entering. Nowhere in the whole place is the width more than 5 meters, as the hosting rock serves as the northern wall throughout the building. The Monastery of Panagia Chozoviotissa is a sublime example of human genius and nature’s forces working together.

Today, hundreds of years after the arrival of the icon at the shores of Amorgos, the Monastery is considered one of the most important religious sites of the Aegean Sea. Three monks still keep it alive and welcome visitors all year round. Its celebration draws pilgrims from all over Greece, who flock in the little church and narrow spaces for the vesper, continuous night prayers and morning celebrating mass. Food is offered after the vesper and the morning mass, reminding the importance of the social function of religion. But perhaps the most overwhelming experience is witnessing the tranquil adoration in the early hours of dawn on November 21st, with the sun rising from the seemingly endless sea. 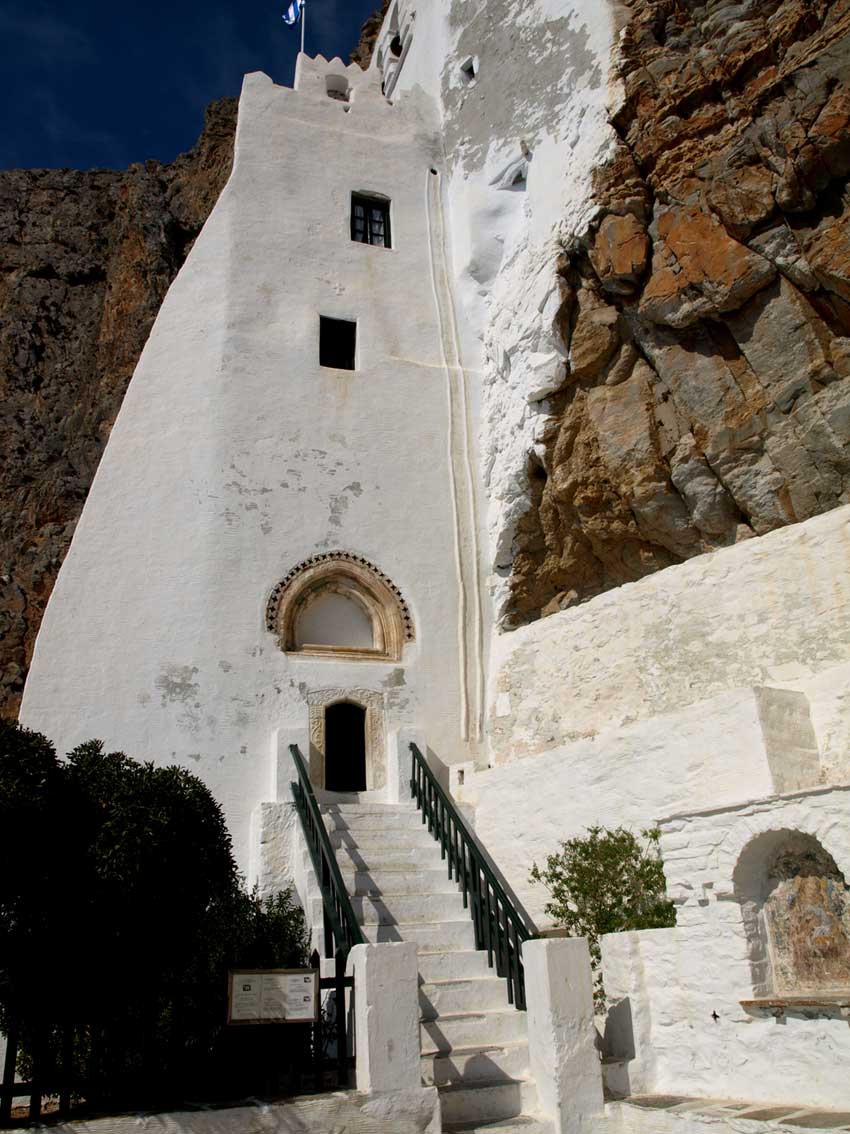 The Monastery of Panagia Chozoviotissa on Amorgos Island